Got $100 in Bitcoins? How will you use it? MIT’s Bitcoin Club has a plan – to distribute the $100 in Bitcoins to every undergraduate on campus this Fall and press the “play” button. They hope to follow and study how students use the digital currency on campus, while also  encouraging academic and entrepreneurial activities with the university.

Two MIT students have raised half a million dollars for a project to distribute $100 in bitcoin to every undergraduate student at MIT this fall.

Jeremy Rubin, a sophomore studying electrical engineering and computer science at MIT, and Dan Elitzer, founder and President of the MIT Bitcoin Club and a first-year in the MBA program at MIT Sloan, have undertaken an ambitious project aimed at creating an ecosystem for digital currencies at MIT. Plans for the MIT Bitcoin Project involve a range of activities, including working with professors and researchers across the Institute to study how students use the bitcoin they receive, as well as spurring academic and entrepreneurial activity within the university in this burgeoning field.

The bulk of funding for the project is being provided by MIT alumni with significant additional support from within the Bitcoin community.

“Giving students access to cryptocurrencies is analogous to providing them with internet access at the dawn of the internet era,” said Rubin. When the distribution happens this fall, it will make the MIT campus the first place in the world where it will be possible to assume widespread access to Bitcoin.

The campus will use the time between now and when Fall students step on campus with Bitcoins on their hard drives, to prepare a robust ecosystem that will make Bitcoin transactions interesting. This will include educating the campus community as well as setting up merchants that will accept Bitcoins. The experiment comes at interesting time when Bitcoins have been battling controversies and pushback – it is just the right push that was need to open up innovation and awareness to the possibilities for digital currencies.

About the MIT Bitcoin Club-

We believe Bitcoin has the potential to be not just a digital currency, but the future of money. While it is still in the early stages, we see Bitcoin as a protocol or platform on which financial and non-financial transactions can be conducted and verified as part of a global public ledger. Bitcoin lies at the intersection of several important academic research areas, including cryptography, distributed computing, graph theory, finance, and economics. The MIT Bitcoin Club seeks to provide forums where Bitcoin-related ideas, projects, programs, events, and businesses can be studied, discussed, and developed. Through club activities, we seek to increase awareness and use of Bitcoin within and beyond the MIT community. 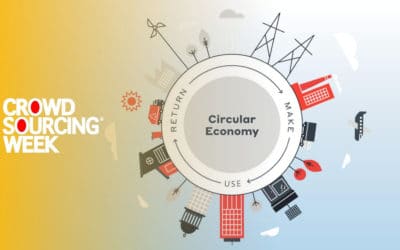 Crowdsourcing in the Circular Economy

Much of the work and focus in the circular economy is based around disrupting standard linear economy business models of “take-make-waste” to ones where higher proportions of resources can be recycled with minimal disposal. Through using waste as a resource to be...