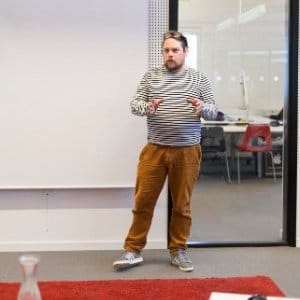 Local Food Nodes is an open digital platform and organization tool that enables sales from local food producers to end-consumers, without middleman, and without income-loss. With Local Food Nodes, Albin and his team aim to enable local autonomous organization around local food, anywhere, and to get people re-connected with the food they eat and the people that produce it.

The project is the result of local tests made in a Röstånga village in Skåne in 2016, were locals could pick up pre-order locally produced food, directly from the producers.

13:15  -  14:15
Hotel Vuollerim Gästgiveriet
We use cookies on our website to give you the most relevant experience by remembering your preferences and repeat visits. By clicking “Accept”, you consent to the use of ALL the cookies.
Cookie settingsACCEPT
Manage consent