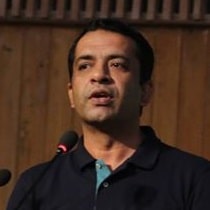 Anshu Gupta is the Founder and Director of Goonj, an award winning pan India non-profit organization. Popularly called the Clothing Man Anshu is the recipient of 2015 Ramon Magsaysay Award for his work on transforming the culture of giving in India.

Having studied mass communication and economics, Anshu started as a freelance journalist and went on to a corporate career which he eventually left to start Goonj in 1998. Anshu is known as one of the leading social entrepreneur and is an Ashoka and Schwab Fellow apart from being a member of the Humanitarian Crisis Council of the World Economic Forum and has been listed by the Forbes magazine as one of India’s most powerful rural entrepreneurs.