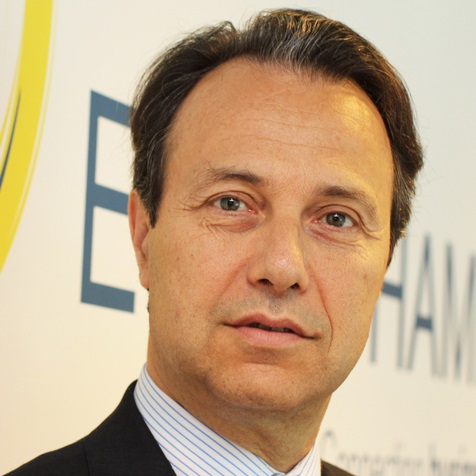 Arnaldo Abruzzini has been the Secretary-General of Eurochambres since 1999. Apart from being a senior lobbyist in Brussels, Arnaldo is also an active entrepreneur, having founded several companies. He still owns shares in telecommunications (Interactive Media), energy (InRes) and business consulting (Consir) companies. Arnaldo has worked as Managing Director of several telecommunications (EPTA), marketing and communication (MediaCamere) and business services (CoFiCom) companies in Italy and the US.

He has also worked in investment banking (MedioBanca) and insurance companies in Bavaria in Germany. Arnaldo started his career as an auditor at Arthur Andersen in Milwaukee in Wisconsin in the US in 1979. He is a graduate in economics, with major in finance, from the University of Rome in Italy.

10:15  -  10:30
Chancellery Auditorium
We use cookies on our website to give you the most relevant experience by remembering your preferences and repeat visits. By clicking “Accept”, you consent to the use of ALL the cookies.
Cookie settingsACCEPT
Manage consent