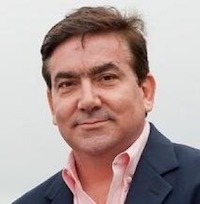 Dr. Sean Casey is Vice President of Commercial Business Development for Atlas Space Operations, and Co-Founder of the Silicon Valley Space Center (SVSC), a business accelerator for NewSpace entrepreneurs in Silicon Valley. As a mentor and investor, Dr. Casey has supported early stage startups in hardware, software, and wetware (i.e. manned spaceflight) sectors of the growing commercial spaceflight industry. He is the president of Silicon Valley Chapter of the Space and Satellite Professionals International (SSPI), a member of the Suborbital Applications Researchers Group of the Commercial Spaceflight Federation (CSF) and served over two decades as a NASA astrophysicist and airborne astronomer.

Dr. Casey is a frequent invited speaker for many events including Space Frontier Foundation’s NewSpace conference, Space 2.0 by Infocast, SpaceCom in Houston, the Satellite Innovation Symposium in Silicon Valley, and an occasional space industry commentator on Bloomberg TV. He is a co-author on numerous publications and has a PhD in Astrophysics from the University of Chicago and dual MBAs from the Berkeley Haas and Columbia Schools of Business.

PANEL: The Final Frontier Will Be Crowdsourced

16:15  -  17:00
Auditorium
We use cookies on our website to give you the most relevant experience by remembering your preferences and repeat visits. By clicking “Accept”, you consent to the use of ALL the cookies.
Cookie settingsACCEPT
Manage consent