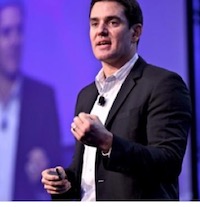 Hayes Drumwright is Co-founder and CEO of POPin, a SaaS mobile and web solution that empowers organizations to leverage crowdsourcing to source pain, build trust, and create buy-in for initiatives in order to scale the business. Drumwright has been a serially successful entrepreneur for over 20 years. His innate ability to grow companies organically was proven at Trace3 where he took the company from an idea and $100 of his own money to revenues in excess of $450M.

He is a founding partner in InstantScale, an investment firm focused on early stage start ups from Silicon Valley. He is also a founder of one of the top cult Cabernet brands in Napa Valley, Memento Mori Winery. In 2010, Hayes was named the Ernst & Young Entrepreneur of the Year in Orange County and the Desert Regions, California. Drumwright currently serves on the board of Trace3 as Chairman, Memento Mori as a director and founder, and Project Hope as chairman. He holds a BS in Business Administration from Boston University.

PANEL: How Crowdsourcing is Changing Future of Work?

12:10  -  12:50
Auditorium
We use cookies on our website to give you the most relevant experience by remembering your preferences and repeat visits. By clicking “Accept”, you consent to the use of ALL the cookies.
Cookie settingsACCEPT
Manage consent