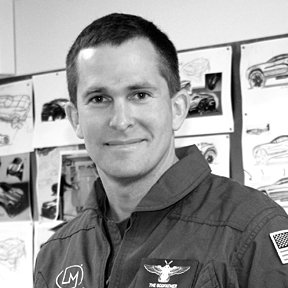 John “Jay” Rogers is helping to build a game-changing American car company. Jay is relentlessly passionate about cars and the industry which surrounds them. His rides have included a 1991 BMW 535, 1971 Mercedes 300SL, a 1996 Dodge Viper R/T10, 1994 Chevrolet 1500 with hydraulic dump-bed, a 2002 Honda Element, and now he drives a 1971 Mercedes 280SL. Previously, John served for 6 years in the United States Marine Corps, where he was an Infantry Company Commander. He has worked as a consultant for McKinsey & Co., as an investment analyst at Ewing & Partners, and at a startup medical device company in the People’s Republic of China. Jay serves as the Chief Investment Officer and director of the RBR Foundation, a philanthropic foundation focused on education and healthcare. He is a graduate of Princeton University’s Woodrow Wilson School of Public and International Affairs, and holds an MBA from Harvard Business School (Baker Scholar). He lives in Arizona with his wife, Susannah, and four sons, John, Charles, Houston, and Ralph.