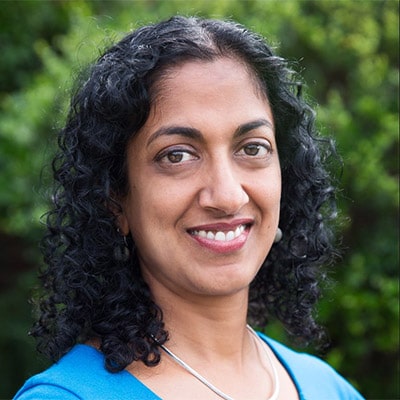 Meena Palaniappan is the Founder and CEO of Atma Connect, an award-winning technology nonprofit building a global movement for social connectedness and ground-up resilience. Atma Connect developed and deploys AtmaGo, a hyper-local, community driven social web app that mitigates the impact of disasters by getting people timely and effective early warnings. Through the app, users share critical information on where to get food, water, and shelter after a disaster. In environments where mobilizing aid from afar takes time, AtmaGo encourages community collective action to rebuild communities and alert government and NGOs to community needs. Neighbors are also organizing to address the root causes of disasters, by planting trees and mangroves and advocating for investments and infrastructure. AtmaGo has reached 3.7 million people in Indonesia, and is expanding to Puerto Rico and Colombia in the coming year. Meena has been implementing community-based technology projects in the developing world for nearly two decades. An environmental engineer, Palaniappan has successfully launched decision-support systems and crowd-sourced mobile projects in West Africa, India and Indonesia. She was the principal investigator for a $1.3 million USAID project to build the WATER SMS mobile to web crowd-sourced mapping system to improve water services for the poor in Indonesia. Ms. Palaniappan has an Environmental Engineering degree from Northwestern University, and a M.S. in Energy and Resources from University of California, Berkeley.