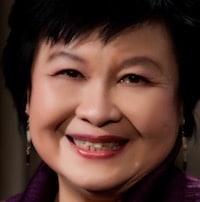 Mei Lin Fung is a technology pioneer working to ensure that technology works for humanity as the next 3.9 billion people come online. She was in the 2-person skunkworks team at Oracle that developed “OASIS,” the proto-customer relationship management (CRM) system under Tom Siebel’s leadership before he founded Siebel Systems. She worked for Marc Benioff as Director of Finance and Administration for the Direct and Desktop Marketing Division at Oracle. The Customer Care Leadership program she designed with Oklahoma State University won the American Competitiveness Society award in 2008. She was brought in to work with Microsoft Tele-sales in China to develop a strategy to collect from those who were pirating software, in the process Microsoft China’s Tele-sales group catapulted from bottom to top rank globally.

Mei Lin served as socio-technical lead for the US Dept. of Defense’s Federal Health Futures initiative which brought together public and private leaders to architect a healthy future in a series of facilitated roundtables celebrated as the most foresighted government-funded event to improve the health of the nation. In 2015, she joined “father of the Internet,” Vint Cerf, to co-found the “People-Centered Internet,” which maintains a global network of “positive change agents” committed to ensuring that technology is developed with a “people-centered” focus – increasing access while ensuring equality, protecting the vulnerable, and prioritizing human well-being. She is vice-chair for Internet Inclusion within the Institute for Electrical and Electronic Engineers (IEEE) Internet Initiative & Smart Village. She is on the World Economic Forum (WEF) Steering Committee for Internet for All and is an active participant in the Digital Identity and Digital ASEAN WEF working groups. She works with EQUALS.org where PCI is a partner organization, strategizing the development of the Global Women-in-Tech Taskforce. Mei Lin studied at MIT with the future Nobel Economics prize winners, Franco Modigliani and Robert Merton, and was privileged to study with Fisher Black of “Black-Scholes” options pricing fame.