The extreme conditions of the Corona crisis lay bare the good, the bad and the ugly.

As interesting as it was to observe how countries fight the same virus in different ways, it is equally fascinating to witness a strong mobilization of crowds from within the general public versus questionable credit-claiming by some powerful political leaders – and what this will mean in the post-Corona period.

The response of the public to this crisis has been overwhelmingly heart-warming in a variety of ways to counter challenges including personal distress, insufficient hospital supplies and slow government support.

Communities have created support groups to help the vulnerable, buying groceries, getting medicine, cooking food or walking dogs for those who can’t do it themselves. Also, “Adopt a Health Worker” is making waves in Australia by attracting thousands of volunteers to help out doctors, nurses and other health workers who are under a lot of strain. People offer to baby-sit or clean the house in order to help those on the “frontline.” 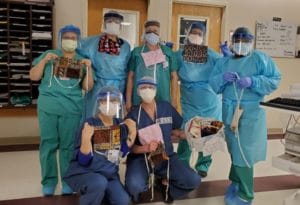 Others have started to sew protective masks, whilst their governments have been lax in stocking up or in mandating large scale production. “The Warriors Project” on Facebook is one of many crowdsourced initiatives to make face masks outside of the regular industry.

A group of UK doctors started a crowdfunding project “Masks for NHS Heroes”. By the time of writing they had raised nearly £1.9 million for protective equipment (PPE) for health workers who are taking care of Corona patients. The crowdfunding site says appropriately “healthcare workers on the frontline without PPE is the equivalent of going to war without armour and protection”.

The “Open Source COVID19 Medical Supplies” group provides open source instructions for anyone to design medical equipment from readily available materials; especially the basic PPE that many governments are failing to supply in the required volume or to the right destinations.

The severity of the crisis thus seems to have brought out a lot of good in people. Great initiatives from within the community provide enormous value to people in need. It shows the power of the powerless working together. The Covid-19 threat has generated solidarity among people from different walks of life by providing a common enemy to fight together.

The power of a community standing together is also expressed in the public’s praise and in its criticism. Even quarantined, people manage to have a loud voice – very literally from their balconies or open windows. Applause to honour healthcare workers has been heard throughout the world; Brazilians are banging on pots and pans in protest against their President’s denial of the danger of the virus and the absence of effective national policy.

In stark contrast, political leaders scramble to win the PR race and often seem more concerned about their own positions than the health of their constituents. Here are four of the more extreme examples where we see a tendency of self-praise, refusal to take responsibility for mistakes, and of putting blame on others:

China is the first country able to begin going back to normality thanks to a multitude of far-reaching containment measures. The Chinese leadership is eager to claim victory and position itself as the world’s champion in fending off the virus. Xi Jinping himself made a victory lap of honour in the recovering virus epicentre Wuhan. State media keep reminding people how well the Communist Party of China has led the country. Beyond its borders, China wants to epitomise a responsible power in a world crisis by providing medical supplies and expertise to other countries.

Though other aspects are knowingly downplayed. The initial cover up attempts, for example. Perhaps the outbreak would not have been as widespread and tragic if there had been more openness and containment from the moment of the first reports.

In this authoritarian regime of central government control it is hard to shift blame on to local actors. There were, however, attempts to blame foreigners, like a conspiracy theory endorsed by Chinese officials about US athletes allegedly bringing the virus to Wuhan during the Military World Games. 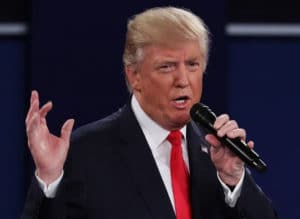 Trump’s position on the Corona threat has moved from comparing it to regular flu that would “miraculously disappear by April” to containment measures against a serious threat; from a desire to have packed churches for Easter to an extension of the containment policy and a projection of 100-200,000 Covid-19 fatalities. At every step the administration proclaimed themselves in full control of the situation and doing “a great job.” According to press briefings they were doing a great job when there were only 15 cases that would supposedly drop to almost zero. They are doing an equally great job since they overtook China, Italy and Spain in the number of cases. The administration is infallible, according to their own narrative.

They blamed state governors for the lack of medical equipment whilst the president takes “no responsibility at all.” They blamed China for their late domestic response, even though the first case in America coincided with the first case in South Korea, a country that acted quickly to flatten their contamination curve.

To deflect the blame for late measures and a lack of testing in the UK, the government joined US criticism of China for not being clear about the scale, nature and infectiousness of the virus.

UK leaders also claim that the lockdown decision and a potential extension of it is led by scientists. This is in stark contrast to key government players proudly claiming not to value experts during the Brexit campaign. Today it’s convenient to shift the responsibility for unpopular measures onto someone else, whilst the government will no doubt later claim the accolade of successfully flattening the contamination curve.

A blatant example of truly dangerous PR is how Brazil’s President Bolsonaro keeps denying the severity of the virus. Other populist leaders ultimately U-turned from denial to containment, but Bolsonaro is 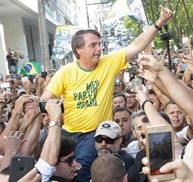 still willing to sacrifice people’s lives for the health of the economy. He makes headlines with passionate speeches and meets crowds of followers, shaking hands and patting people’s backs – totally against healthcare advice.

Fortunately for Brazilians, local governments have put relevant measures in place. Although the President scolds them for this, he will undoubtedly claim responsibility if it flattens the curve.

When we look back at the contrast

At a time when honest, selfless and effective leadership is needed, we see petty PR-spinning by some powerful leaders compared against great examples of crowdsourced community efforts.

Obviously there are also good examples of leadership around the globe. I am merely highlighting some more extreme cases that signal a dangerous trend. Thankfully it has become harder for those politicians to control news and opinion. We are all on social media. Satire shows are thriving, ridiculing their behavior. False claims can be fact-checked and flip-flopping on stance or policy is easily exposed.

In a post-Corona world we will look back and I hope they will be judged accordingly. Not on making mistakes – it’s an unprecedented crisis, there are plenty of mistakes to make – but on how they manipulated the circumstances for personal purposes. At the same time, I hope we will also look back at the value of crowdsourced initiatives, and use them even more to rely on ourselves as we rebuild.