Entrepreneurs are not that brave… 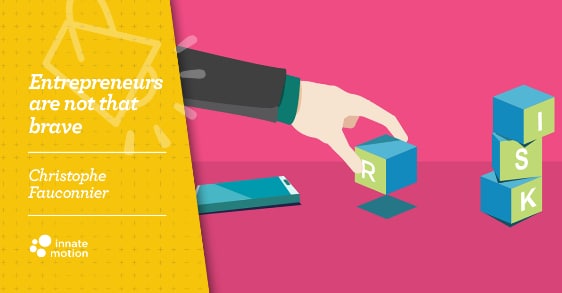 … they just know how to ‘reduce risk’ with human and business sense.

Entrepreneurs are often celebrated as risk takers; people who have the courage to achieve goals with resources outside of their control. But let me share a little secret with you:

Most entrepreneurs are not that brave. In reality, they don’t have to be.

What I have seen is that most successful entrepreneurs are very good at mitigating risks, and by doing so, they become brave. The vital condition for bravery is not attitude, which is certainly a component, but rather, it is the ability to leverage strategies for mitigating risks. After starting several businesses myself and working with great entrepreneurs across the globe, I want to share how we can apply Innate Motion’s impact matrix tool to get people, teams and organizations to change their behavior.

Specifically we focused on how to grow bravery through getting them to adopt risk mitigation behaviors.

Elon Musk argues that if the idea is important enough, risk taking is justified. He states:

“I didn’t go into the rocket business, the car business or the solar business thinking this is a great opportunity, I just thought, in order to make a difference, something needed to be done. I wanted to have an impact.”

As such, “risk taking” is (for most us) an undesirable human act. We take risks because we need to, not because we want to, but when we can make risk taking more humanly meaningful we can make this behavior more desirable. The challenge is how to connect the behavior of “risk taking” to our moral values. I am, for example, more willing to invest in a risky business venture when I see it has the possibility to create a lot of value for the people it serves and the community it operates in.

As people, we easily get soft when striving for our own interests, yet we become bold when we can stand up for others or something bigger than ourselves. To illustrate this point in another way, watch this clip from the film Erin Brockovich. What Erin does so brilliantly in the clip is that she re-humanizes the people she is standing up for, turning then from victims to people who demand respect and for whom we can dare to care for.

Risk taking is a lot like golf, the more you practice, the luckier you get. Risk taking requires as much  skill as it requires will.

Jeff Bezos from Amazon put it this way:

“Failure comes part and parcel with invention. It’s not optional… and we understand that and believe in failing early and iterating until we get it right. When this process works, it means our failures are relatively small in size.”

In the agile world we will have to learn how to fail frequently, fail fast and fail forward. It’s only when failing becomes common place in an organization that we can learn to master it. To allow for making  failure commonplace, we must break down the risks into smaller chunks so we can oversee the risks, gain fast feedback and continue to get better.

Our social context defines much of what we do and when it comes to risk mitigation, more than confidence is required. It requires a lot of trust and social currency.

Companies like Dyson or Ben & Jerry’s have understood this.

At Dyson, they love to share the story of how Dyson himself failed 5,126 times and how he reveled in failure because that’s what engineers do. They tinker, they test, they try out new ideas. They get a kick out of it. And they are proud of these 5,126 failures. They memorialize them in a small brochure that comes with every vacuum cleaner that Dyson sells.

Another company that has built positive social currency around risk taking and failure is the ice cream company Ben & Jerry’s. They make failure a social happening in the form of a graveyard for failed flavors. Their flavor graveyard has become a major tourist attraction and it’s like Ben & Jerry’s CEO Jostein Solheim says, “The brand doesn’t hide its failures from the public.” In fact, they use this mindset towards failure to build the the company and the brand.

Entrepreneurship is all too often a lonely journey. We think too little about how we can design for more and better contributions of others and as a result, we limit our ambitions and impact.

When we started African Drive, a business that wants to improve the ecosystem of mobility in rural Africa, Fried Vancraen, the CEO of Materialise, was quick to recognize that he needed a lot of support and the abilities of others to get African Drive up and running. His initial ambition was to support surgeons and hospitals in rural Africa with 3D printing technology, but when his key contact in Benin (a local radiologist) died in a road accident, this ambition changed beyond the scope of his ability. Serving surgeons with better technology solutions is certainly within the scope of Fried and his company Materialise, but starting and running a bus company to improve the ecosystem of mobility in rural Africa required other skills. Fried called upon us, his fellow travellers, the people he trusted and shared values with, and together we designed for unlocking the contribution capacities of diverse support communities. And it worked.

Today, less than 3 years after starting this company, we are a profitable, self-sustaining transport company with 27 buses, serving more than a 1000 people a day with greater safety and reliability in an underserved region of Benin. We have also won prizes for being the most sustainable startup in both Belgium and Benin.

“Superficially,” he says, “I think it looks like entrepreneurs have a high tolerance for risk. But, having said that, one of the most important phrases in my life is protect the downside. So okay, we made a big, bold move going into the airline business, but the most important negotiation with Boeing was the right to give the plane back after twelve months.”

His advice is “make bold moves, but make sure to have a way out if things go wrong.” By protecting your downside, you can remain agile and step out of a venture or project when it is failing. We must remember that while Branson is known to have started some five hundred companies, he has also shut down two hundred of them that didn’t work.

The influence factor we tend to ignore the most is the non-human factor. We see that others are misbehaving, and we look to change them, not their environment. Caught up in the human side of things, we completely miss the impact of an office space. Consequently, one of our most powerful sources of influence is often the least used because it’s the least noticeable.

When our company had offices, I had limited access to the younger people in our organization. I even had limited access to the people on the floor below me. Fact was that the environment, our office, made the distance between one floor greater that the distance to other colleagues in far away places. Skype and Google hangout changed all that. By putting all people on the same level, the internet level, people stopped thinking risk taking and risk mitigation is a responsibility of the top but rather a responsibility of the base. It lend to us closing all our offices across the world leading to the fact the no one could hide. The never hide environment did more to our risk taking ability than any incentive system.

Busting the myth of bravery

So maybe it’s time to bust the myth that entrepreneurs all need to be bold and brave. The most successful ones are great at applying influence strategies for mitigating risks with human and business sense. These strategies work in one of two ways. They either “motivate” or “enable” risk mitigating behaviors. These “want to” and “can do” domains can then be further subdivided into personal, social and structural sources. It’s time to think of bravery and boldness as an outcome rather than a starting point for every business venture. The good news is that we can all design strategies for better risk mitigation so all of us can become more brave and bold.

If you want to learn more about the impact matrix, get your tickets and join us for our upcoming presentation at Crowdsourcing Week Brussels. Stay tuned for a recorded version on our YouTube channel.

Founder and CEO of the Innate Motion group, thought leaders in the field, building the approaches and tools that re-invent marketing with companies such as Coca-Cola, Unilever or Visa.