The Mayor of London recently announced his annual allocation of £1 million available to a range of grassroots community projects. Operating in conjunction with UK crowdfunding platform Spacehive, and co-ordinated through the Greater London Authority, community project leaders can apply for a maximum contribution of up to £50,000 for not-for-profit projects that serve the wider community, as long as the sum they ask for is no more than 75% of their total fund raising target.

The Mayor and GLA’s main purposes of the initiative appear to be to:

The re-purposing of abandoned locations and unused buildings, particularly high street retail units, is a matter of growing national concern. Online shopping, road congestion, scarcity or cost of parking spaces and a recent hike in business rates have all reduced footfall and raised costs at traditional retail outlets.

The #CrowdfundLDN project will crowdsource many ideas that could influence local authority policies on how to respond to the hollowing out of previously vibrant areas within communities, and also empower groups of volunteer citizens to work together to deliver their solutions at a lower project cost than full funding from any local authority’s budget.

Being selected is naturally very positive news to leverage to potential backers through PR and social media. The projects that fail to receive a Mayor’s contribution can still choose to continue their efforts to raise funds, though of course they will have a tougher job to reach their target.

Benefits for the funding applicants are numerous.

At a community level, participation in the scheme draws together people with a shared focus on involvement in a project for ulterior motives. Firm friendships and alliances between local businesses have been forged in the previous two years of the scheme.

At a personal level, a number of individuals may develop new skills through the experience and interaction of being part of a team, and gain personal confidence through empowerment. All and any of these factors could boost their employment prospects and future personal income potential.

And all successful projects will improve the number and range of London’s community facilities available to the city’s population.

Previous successful projects include building a sustainable food yard, kitchen and event space at Bankside to act as a hub for the promotion of sustainable food activity. The project provides education, outreach and advocacy for innovation in sustainable food practices, and incubator space for startups. Affordable access to a professional kitchen as an available community resource enables hopeful commercial food and drink suppliers and would-be chefs and restaurant owners to experiment, gain experience and refine skills.

One project completed the external refurbishment of an iconic and much loved local art deco cinema in Hackney. The project also created a second screen allowing for more local events and the sustainable operation of the enterprise as a non-profit community facility. 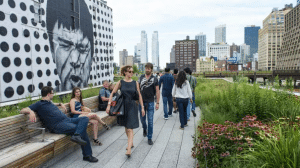 A south London disused railway space will enjoy a new lease of life as a 900m pedestrian walkway and natural garden area in what was previously a rail yard used for coal wagons. It is a facility comparable to the inspiring and better known elevated walkway examples in New York and Paris. An initial crowdfunding project in 2015 on Spacehive raised money for a feasibility study, now published as a 180-page document. In addition to a contribution from the Mayor of London, Southwark Council also donated £10,000.

Previously abandoned garden allotments in Tolworth, Kingston Upon Thames, were re-purposed as a suburban farming project to teach food-growing skills and create a productive, sustainable source of locally produced food. The designers of the growing space went on to win an award at the prestigious Royal Horticultural Show at Hampton Court with an edible garden.

There are numerous other examples around the world of civic authorities using the offer of crowdfunding support as an incentive to crowdsource ideas for civic development, and as a tool to measure relative support in the community and determine which local projects to back and to what degree.  Do you have an example you can share with the Crowdsourcing Week community?