“In order to have a breakthrough, you have to break something” 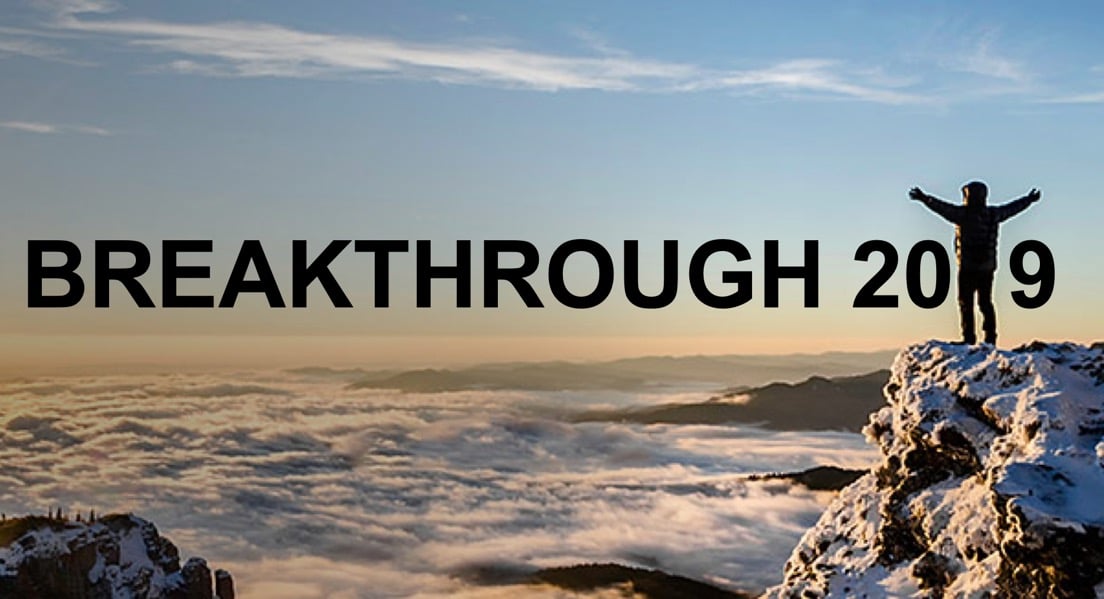 I wish I had come up with that line, but I must give credit to Joe Polish. It neatly sums up the times we’re living in, where the pace and scale of change are disrupting many established business models and social norms, and admittedly causing some damage to what existed before. I was going to say that I decided to choose “Breakthroughs” as Crowdsourcing Week’s theme for 2019, though it feels almost like it was not my choice at all but forced on me by all that’s happening around us.

Crowdsourcing is at the forefront of many breakthroughs. The growth of opportunities for organizations to open up their processes and take advantage of global networks of both proven experts and laymen enthusiasts to try and solve their issues exceeds the rate at which we can keep up with them all. So also in 2019 I’m very pleased to tell you we’re going to look at the overall crowdsourcing sector under four key headings of Enterprise, Public/Government, Platforms/Vendors and Research.

It’s among Platforms/Vendors that we’ve so far seen the greatest disruption and breakthroughs. Technology has provided the means for us to increasingly shop online, providing convenience and saving us time and costs to visit actual stores. Consumer retail behaviour has been transformed as e-commerce giants such as Amazon, eBay and Alibaba have sent shockwaves through traditional retailers and many established brands have disappeared from our main streets, high streets and shopping malls.

Similar shake-ups in service industries are next. Change is definitely coming, as General Partner Andrew Chen of a Silicon Valley venture capital firm Andreessen Horowitz so convincingly explained late in 2018. To a degree it has already happened. 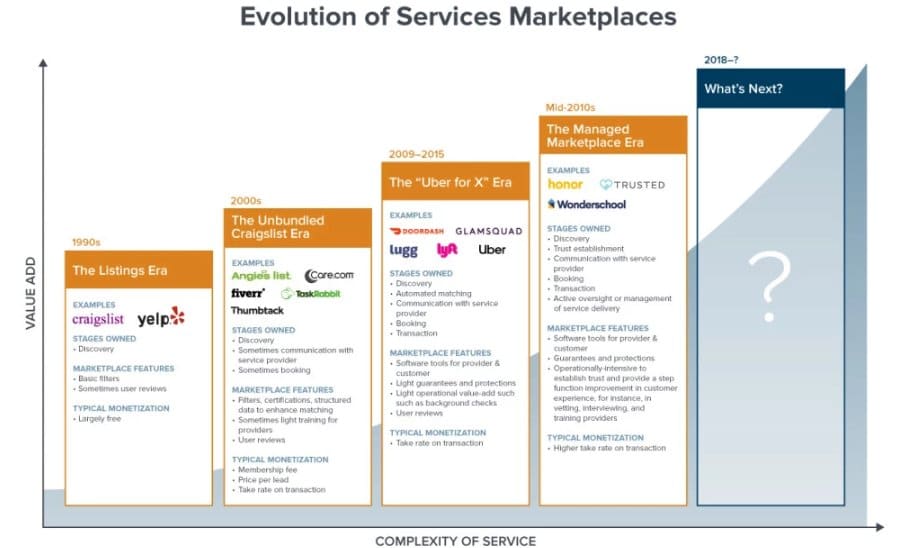 However, comparisons of similar tangible goods are more straightforward and it’s frequently easier to reach a consumer purchase decision than it is to choose between competing service providers. It’s not so easy to choose which law firm to pursue an accident claim, which building surveyor or construction contractor to use for a home or business premises extension, or which tutor to give the kids extra lessons.

In the past we have traditionally relied on word-of-mouth recommendations and referrals from people we know and trust, people who are like ourselves and/or who have gained our respect. And on the occasions when we’re going to be involved with service providers over a period of time we may like to check for some level of a personal chemistry beyond formal qualifications. This is where I believe the biggest breakthrough will be the transformation of the selection processes we use by enough people putting enough trust in to crowdsourced information that is reliable and undisputed.

Automation and Al will bring consistency to larger scale service delivery, provide improved efficiency and impact on employment in virtually all occupational groups, though to varying degrees, says an extensive January 2019 report from US research group the Brookings Institution.

Healthcare is the major service where we are going to first see such transformations and breakthroughs. The technologies of machine learning and artificial intelligence applied to mass data have already proved to perform better than humans at detecting cancer tumours, dementia, eyesight afflictions, and many other diseases. In a current project, researchers are applying machine learning in intensive care units to distinguish between false alarms and real medical issues. Such are the benefits of crowdsourced research, one of our four key sectors of interest this year. But sometimes the benefits of superior technology alone are not enough.

The growth of DNA testing firms has been prolific, but what if our data ended up in the hands of insurance companies? Security is a major issue. A huge cyber attack on the UK’s National Health Service in May 2017 plunged dozens of hospital trusts in to chaos. The public everywhere, not just in the UK, is growing increasingly wary of personal data breaches. Yet the governments of WEIRD economies (Western, Educated, Industrialised, Rich and Democratic) face budget dilemmas over the increasing share of GDP required to treat aging populations with a longer life expectancy while the number of workers they can tax declines.

In 2008 Google launched Google Flu Trends. Before doctors’ surgeries become inundated with sick people, flu outbreaks can be identified days before traditional health services ring the alarm bells by monitoring peoples’ online searches. Yet there are growing perceived threats from surveillance capitalism where such information on predictive behaviour is bundled up and sold without our knowledge or permission to third parties. Google is no longer publishing results from this initiative.

However, financial imperatives make transformation of healthcare a necessity, so it’s clear there has to be better control and supervision of the data to win over vital hearts as well as minds and make it acceptable to voters. Long-term, AI has to be used with more of an evident social conscience to be acceptable to the majority of people. So the interests and activities of entrepreneurs creating the technological breakthroughs overlap with those of governments and other public bodies to make them acceptable. But will this pit Governments against FAANGS (Facebook, Apple, Amazon, Netflix and Alphabet’s Google) over more than paying ‘proper’ levels of taxes?

Crowdsourcing techniques, the outcomes they provide and breakthroughs they enable are steadily gaining acceptability, though as I’ve just explained it’s at different stages of acceptance and adoption in different business and social sectors. It’s an exciting time and we certainly won’t be short of material to cover and discuss in 2019. Stay tuned!