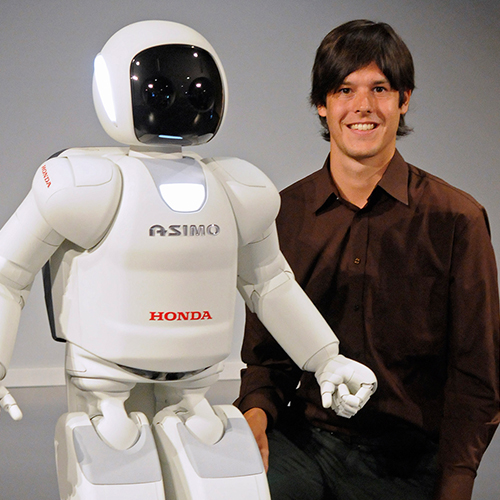 Prof. Dr. Ir. Bram Vanderborght received his Ph.D. in 2007. The focus of his research was the use of adaptable compliance of pneumatic artificial muscles in the dynamically balanced biped, Lucy. In 2006, he performed research on the humanoids robot HRP-2 in AIST, Tsukuba (Japan). From October 2007-April 2010, he worked as a post-doc researcher at IIT (Italy). Since October 2009, he was appointed as professor at the VUB. He is a research director at the Universitatea Babes-Bolyai, Department of Clinical Psychology and Psychotherapy with a project on robot-assisted therapy with ASD children and VUB-PI of the DREAM project.

He is a member of the Young Academy of the Royal Flemish Academy of Belgium for Science and the Arts. In 2013, he received an ERC Starting Grant on new generation compliant actuators. His research interests include cognitive and physical human-robot interaction with core technology using variable impedance actuators.

17:20  -  17:40
Chancellery Auditorium
We use cookies on our website to give you the most relevant experience by remembering your preferences and repeat visits. By clicking “Accept”, you consent to the use of ALL the cookies.
Cookie settingsACCEPT
Manage consent