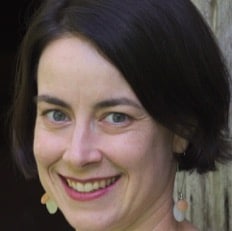 Dr. Liz MacDonald first witnessed the aurora as part of her doctorate research conducted in Alaska, building instruments that fly onboard research rockets to measure the particle precipitation causing the lights. She received her PhD from the University of New Hampshire and spent 9 years at Los Alamos National Lab (LANL) as a postdoctoral researcher and staff scientist. There she primarily focused on experimental plasma mass spectrometer instruments for the Van Allen Probes NASA spacecraft and LANL payloads for geosynchronous orbit.

In 2012 she founded the platform Aurorasaurus to take advantage of new sources of data in the first solar maximum with social media. The project has received interdisciplinary funding from LANL, the US National Science Foundation, and most recently NASA. Since 2014 she has been a civil servant with Goddard Space Flight Center and NASA HQ. In 2018 she was the lead author on the paper identifying a new type of aurora called STEVE, from citizen science and traditional observations.

From the spark to the fire, reflections on five years of crowdsourcing observations of the aurora