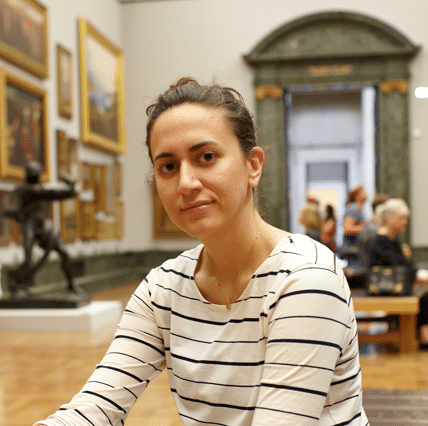 Foteini, 28, is the Founder of USEUM and a PhD Candidate at UCL. USEUM is the first ever Crowdsourced Art Museum, which started off from Foteini’s part-time PhD studies at UCL under the title “Making Art more Accessible with Crowdsourcing”. USEUM has received £110,000 as seed-funding and in 2012 it was the 1st prize winner of the Athens Startup Weekend competition hosted by the Microsoft Innovation Center. Foteini’s background is a BSc (Hons) in Computer Science from the University of Piraeus and a 2-year MFA in Interactive Digital Media at Ravensbourne College of Design and Communication (City University), which she attended on scholarship and earned with A+. Her MFA thesis is an Augmented Reality iPad game she developed in collaboration with Shakespeare’s Globe Theatre in London called “Shakespeare’s Hunt”. During her Masters studies Foteini worked as Lead Developer of mobile applications for the Museum of BMW. Foteini has been invited to discuss her research and work at various conferences, whilst as an undergraduate she was a Microsoft Student Partner, contributing to numerous projects & events.

16:40  -  17:00
Regent Street Cinema
We use cookies on our website to give you the most relevant experience by remembering your preferences and repeat visits. By clicking “Accept”, you consent to the use of ALL the cookies.
Cookie settingsACCEPT
Manage consent