In my last post I looked at some of the technologies that are ushering in the decentralized energy revolution, such as cheap solar power, home batteries and the blockchain. But there’s another type of battery that could also change the way we store and use energy – and it comes with its own set of wheels.

Today, around 1.3 million electric vehicles (EVs) are on the road worldwide. Every major car manufacturer is now working on one, and the number of EV models on the market has grown from 2 in 2010 to over 25 today. Tesla Motors took over 400,000 preorders for its $35,000 Model 3 earlier this year, and Ford has already invested $4.5 billion in electric cars; by 2020 more than 40% of its lines will be electrified. 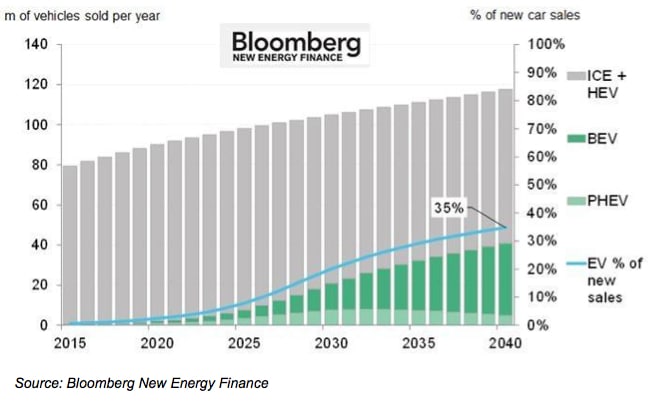 Japan even has more electric vehicle charging points than gas stations – 40,000 as opposed to 34,000 (although this figure, released by Nissan, rather cheekily includes home charging points). Nissan has also revealed plans that would allow EV batteries to act as “mobile power units”, supplying cities, homes, schools and hospitals with electricity. The UK scheme will allow the National Grid to draw electricity from car batteries at peak times as it tries to balance supply and demand. Apparently, if all of the 18,000 Nissan electric cars in the UK were connected at once, their combined electricity output would equal a 180MW power station.

Although the rise of electric vehicles could open up new means of providing power, they will also put more strain on the grid – which is why many of the energy efficiency technologies currently being trialed in smart cities are so important. Cities themselves are energy guzzlers too: they account for three quarters or energy consumption worldwide, and 80% of CO2 emissions. However, Cisco estimates that cities that run on information could improve their energy efficiency by 30% within 20 years.

You can already see glimmers of this energy efficiency future today. For example, eight Spanish cities have cut energy consumption by 64% with smart street lighting. And smart meters, adaptive lighting and heating systems and even ‘smart’ windows that lighten or darken according to lighting intensity, thereby further reducing artificial heating and lighting loads, are all becoming commonplace in many commercial and residential buildings.

By 2025, up to half of the world’s smart cities could be outside America and Europe, according to recent studies from research firms IHS and Frost & Sullivan – Dubai, for example, hopes to become the world’s smartest city by 2017. But as I wrote in a previous piece, the beginnings of a smarter, connected world starts with simple collaboration, harnessing natural synergies and getting citizens on board. Any city that aspires to be ‘smart’ must bear that in mind.

Although the pieces of the decentralized energy revolution are all in place, the politics of energy could still hold it back. Positive developments like Germany’s ‘Energiewende’ (energy shift), which aims to wean the country off fossil fuels, sit in stark contrast to the UK Government’s handling of the £18bn Hinkley Point C nuclear project. Prime Minister Theresa May recently approved it after months of speculation on its future (not least in France and China: EDF is leading the project and China is part-funding it), but critics believe the technology is out of date and expensive. Similar plants in Flamanville, France, and Olkiluoto, Finland, are years behind schedule and billions over budget. The price promised to EDF for Hinkley’s electricity – £92.50 per MWh – is also double the current UK wholesale price.

Have you any experiences with energy decentralization or electric vehicles to share with me?

For a lot more on Smart Cities and the wider disruption to established business models in many industries and markets checkout CSW Europe 2016, Crowdsourcing Week’s week-long conference in Brussels 21-25 November. A full Agenda and tickets are available now.