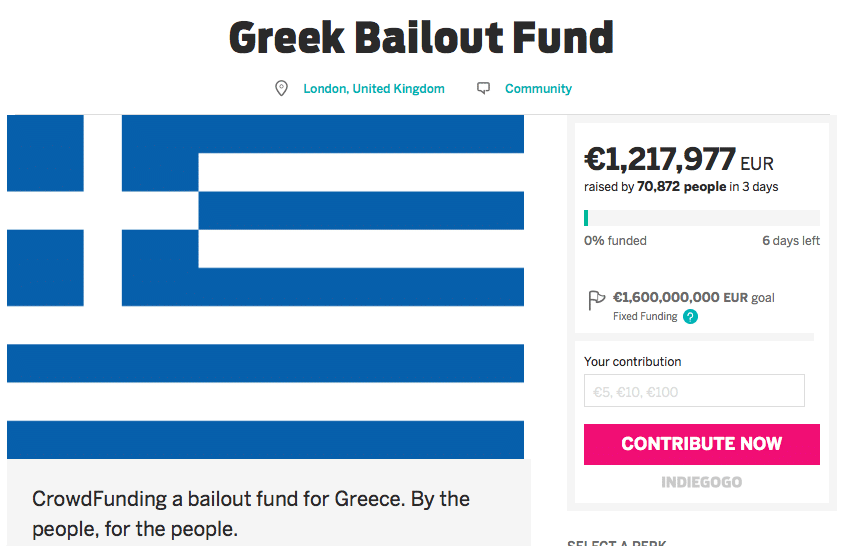 All eyes are on Greece’s financial crisis — and on Indiegogo, a crowdfunding platform.  Can collective action of world citizens bail a country out of debt? Thom Feeney, a marketing manager based in UK, got the ball rolling on crowdfunding platform Indiegogo, believing he would be able to raise funds to help Greece for bail out. “Decided to solve the Greece Debt Crisis via crowdfund,” he tweeted. “All I need is for everyone in EU to buy a Feta and Olive Salad.”

As of this writing, Feeney “has already raised over $1,217,977 – less than 0.01% of what Greece needs,” TIME wrote. One man tried to help solve the crisis and with the participation of the crowd—whether delivering a bunch of Feta, Olive Salads and wines even a postcard of Alexis Tsipras would be seriously sorted out—crowdfunding is a lifesaver for everyone. And this goes beyond raising funds and collecting money. The crowd is the focal point and we will be watching if they have the will to bailout Greece.

Crowd has more money than you think

I always say that the crowd has more money than Carlos Slim or Apple. They have raised many billions in the past years, pooling the funds in various crowdfunding platforms like Kickstarter, Indiegogo, and among others to make things happen—from Pebble Watch to Coolest Cooler to Flow Hive to big real estate projects and other ventures through equity funding. Now you’re getting the picture. Remarkable inventions and projects are funded by the crowd, and with the crowdfunding industry predicted to surpass VC, “we saw $16 billion crowdfunded in 2014, with 2015 estimated to grow to over $34 billion,” says Chance Barnett.

Billions will be bankers in 2020

Jeremy Rifkin said that now millions of people are bankers. My bet is on the crowd and I believe that by 2020 billions of people will be bankers. And that’s just five years from now. I’ve been saying this every time I speak. Platforms are democratizing the finance and access to technologies that enables the crowd to invest and become bankers themselves. A new economy will emerge that will disrupt old financial systems and end capitalism. “We are seeing the final triumph of capitalism followed by its exit off the world stage and the entrance of the collaborative commons,” Rifkin said. When the crowd meets collaborative capital—a financial revolution is at hand.

We need something that can scale…like Blockchain

Banks are actually experimenting with Blockchain technology and with such a technology accelerating this innovation; the future is bright for everyone. UBS Bank is also exploring it with ‘Smart Bonds’ and even the 10th largest bank in the world, Santander is on it, experimenting how it can improve the banking. By 2020, we won’t need to bail out irresponsible governments or companies like GM and AIG insurance that got a breather during the 2008 crisis, but instead we’ll be funding responsibility with crowd capital. On that note, everything else becomes transparent and accessible.

The future is uncertain, and so where are we going to position ourselves? Can the crowd become part of the solution in any financial crisis? With a resounding yes, they can.