How to Avoid Reward Crowdfunding Pitfalls 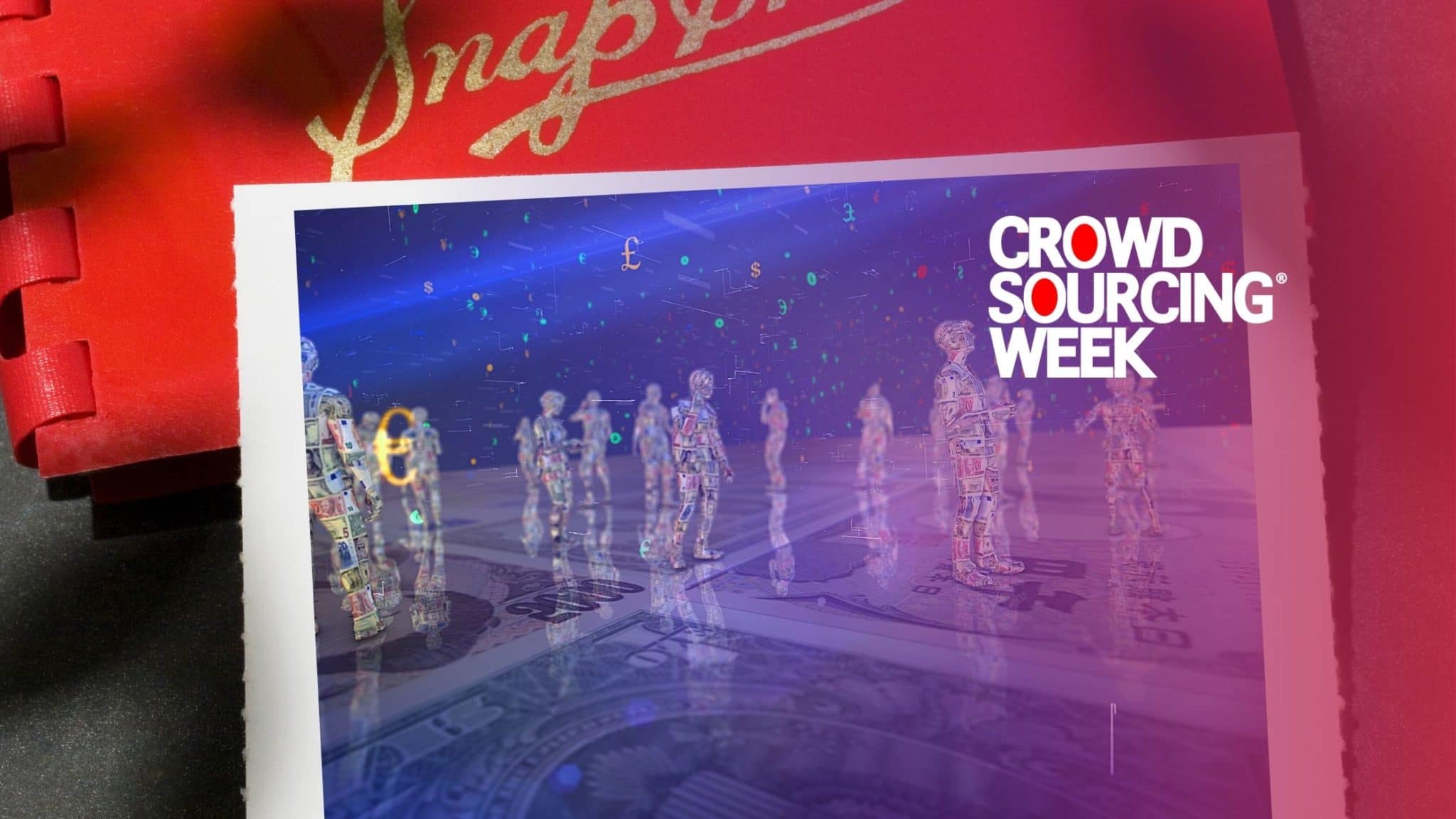 Reward crowdfunding has come a long way from its early days on Indiegogo and Kickstarter as a way of raising money to support creative ideas and projects. There have been projects that generated millions of dollars’ worth of pre-orders for exciting new products, and created fortunes for the founders. Though plans can still sometimes fall apart.

The regular success names that come to mind include Oculus Rift (bought by Facebook); Pebble smartwatch (sold to Fitbit);  the board games Frosthaven and Kingdom Death: Monster raised 8-figure sums; the Australian Flow Hive project encouraged and enabled over 38,000 people to keep bees and make honey, raising an 8-figure sum through pre-orders.

With many ‘best in class’ examples available to study, it’s sometimes quite amazing to see  some failures that still catch backers out. Crowdsourcing Week’s own range of crowdfunding advice and services are available from our Crowdfunding Central Hub.

One crowdfunding campaign management agency, The Crowdfunding Formula, only wants to hear from business owners intent on raising at least $1 million of product orders. This is way beyond asking friends and family for some help! Their project teams deliver a 12-stage support programme that includes email marketing, social media advertising, affiliate marketing, copywriting, chatbots and overseeing video production. As the details of funds raised shown on the images below testify, it can be very effective. 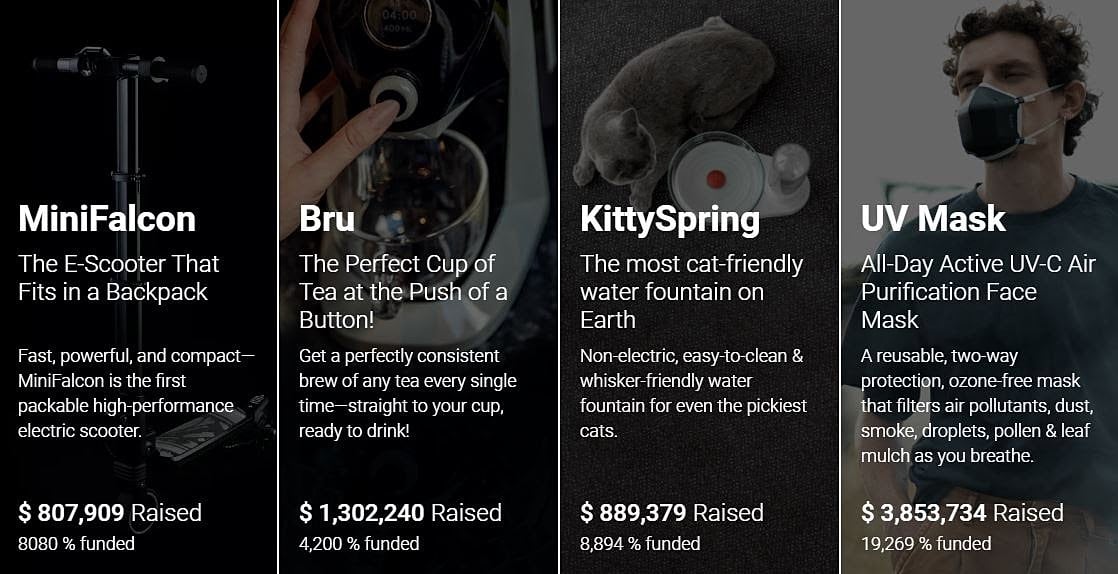 A selection of crowdfunding campaigns managed by The Crowdfunding Formula

Though several issues become apparent from looking at more details on these projects, which were chosen at random.

Backers are often asked to place pre-orders for items that are still at a prototype stage. This means any indications of possible shipping dates remain subject to change. Pre-ordering goods that don’t yet exist through crowdfunding projects doesn’t come with the ease or guarantees of buying online from Amazon or ebay.

Many project teams use an influx of funds to re-address product design and performance issues to make improvements – they want to bring to market a product that’s as good as it can be. There will be delays.

A new prototype with new specifications impacts on a manufacturer’s ability to meet the production times and cost estimates they first provided. Global supply chain disruptions due to Covid-19 have also complicated matters in 2020.

For example, by November 2019, BRU, “The Ultimate Tea Machine” company based in Switzerland, had received a total of over £1.4 million of orders from backers through both Indiegogo and Kickstarter. A year later, in November 2020, the management team was still checking the performance of a revised prototype, and shipping the first deliveries has been delayed to February 2021 at the earliest.

A warning for entrepreneurs

Leaders of crowdfunding projects need to be aware that too much success can prove to be a major problem if the manufacturing stages are not planned and managed properly.

The MiniFalcon was positioned as a foldaway high-performance electric scooter that could fit in a backpack. Around 2,000 people wanted one, perhaps with some extra accessories, and handed over more than $800,000. After the first shipment of 500 units was sent out in January 2020, some owners reported product faults and others had injured themselves because the scooter was too small.

A large slice of the remaining funding then went into modifying and developing new factory tooling, though the manufacturer proved incapable of making products to a high enough standard. By August 2020, MiniFalcon was almost bankrupt and using what funds were left to send out an alternative brand of e-scooter. Some backers are calling for a class action lawsuit to recover their pledges of up to $400 each, even though the money has gone. It was a far different outcome to what anyone expected when over $800,000 of pre-orders were placed.

The UV Mask team are also facing difficulties to meet anticipated delivery dates. They ran their Kickstarter campaign before the Covid-19 pandemic, with over 14,000 people ordering their “reusable, ozone-free masks with active UV-C that fully inactivates pathogens, smoke, pollution, and allergens like pollen and leaf mulch.” UV Mask then had to test and ensure it would work against Covid-19, and then get in line to have them made. Once again, the product eventually manufactured is not exactly the prototype offered to begin with, with implications on manufacturing costs and timing.

So a broad message to entrepreneurs using reward crowdfunding is be careful what you wish for when you’ve had a great new product idea. Maybe it would be a good idea to set a maximum order limit, and build a solid company from a good beginning, rather than trying to run before walking.

In the UK, two star actors (alongside a host of other stage and screen celebrities) are figureheads of a reward crowdfunding project that hopes to raise £4,500,000 (about $6 million). The money will buy a former UK home of the author JRR Tolkien, where he wrote The Hobbit and The Lord of the Rings, and convert it to a literary centre.

Project Northmoor (the house address is 20 Northmoor Road, Oxford) is a registered charity and raising the funds on its own site, and from December 7 there has also been a JustGiving page. Rewards are available to match tiered levels of donations classed from Hobbit (the minimum level of £20/$25), through Dwarf, Human, Elf and Wizard (over £200,000/$250,000).

The plan is to renovate the house so guests can experience what it would have been like to call on Tolkien in 1940. The Literary Centre will also provide a programme of retreats, writing seminars and other cultural events, and an online programme.

The standard advice about crowdfunding is to not start until 30% of the funding target has already been promised. Early signs of success are vital to build momentum and confidence. However, after the first 12 days the project had not quite reached 12% of its target. The project closes after three months on 15th March 2021. We hope Sir Ian McKellen, Martin Freeman, and the other stars of stage and screen associated with it will engage with their personal networks very soon.

Reward Crowdfunding is not a done deal

Kickstarter’s Terms of Use make clear the difference between buying an existing product and supporting the development of new ones:

“Backers must understand that they’re not buying something when they back a project—they’re helping to create something new, not ordering something that already exists. There may be changes or delays, and there’s a chance something could happen that prevents the creator from being able to finish the project as promised.”

Even so, backers who find themselves out-of-pocket are prone to claim they have been scammed and demand revenge on the failed would-be entrepreneurs. Perhaps there is a case that the crowdfunding platforms ought to check the business know-how credentials of project teams that are raising vast sums. Some might think the crowdfunding campaign management agencies should perhaps be more careful to check on prototype status and supply chains.

Above all, backers have to understand they are pledging money to product development, which often has a non-guaranteed outcome.

All business owners will enjoy and benefit from “Learn How to Crowdfund Your Next $1M!” on 29th December 2020. CEO of The Crowdfunding Agency, Narek Vardanyan, will join our founder Epi Ludvik for a Crowd Session discussion. This event will run from 5pm to 6.30pm CET. Tickets are available at https://crwdwk.com/crowdfund2021