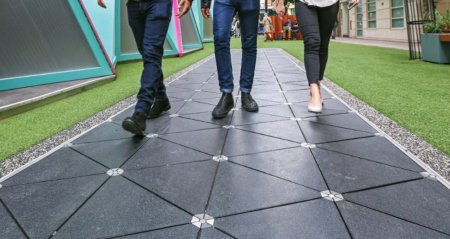 55% of the world’s 7.7 billion people already live in urban environments, and this figure is rising fast. With the simple act of a footstep, Pavegen’s smart flooring system enables people to physically participate in the sustainable development of their city and at the same time, to improve the city’s understanding of its citizens.

Pavegen’s interactive smart flooring system converts the kinetic energy of footfall into useful amounts of off-grid power for applications such as LED lights and sensors. Significantly the technology also produces rich data. Bluetooth beacons in the system connect to smartphones, rewarding users for their steps and generating permission-based analytics.

So far, the footfall-harvesting tech has deployed in 36 countries, and features increasingly in smart city developments, retail destinations and transport hubs such as airports. Pavegen brought in £1.8m in revenue last year and is currently raising on Crowdcube, see their pitch page.

When did the idea of generating power from people’s footsteps first come to you, and when did you launch Pavegen as a business?

I developed the technology as a response to climate change. On a placement year at energy company E.ON, I spent time working on wind and solar solutions which could power lighting in dense urban environments. I was not successful but a short time later, while regularly passing through busy London train stations, I had the idea of harnessing some of the ambient energy from people and footfall. After graduating university in 2009, I began testing prototypes and formed the company, Pavegen.

Some of your first installations were high-profile to achieve publicity through media coverage, can you give some examples?

There are three particularly high-profile projects I’d like to mention.

The first was in 2013 when Pavegen supported Shell’s #makethefuture campaign, creating a 200-tile people-powered football pitch situated in Rio de Janeiro‘s Morro da Mineira favela, a deprived area in Brazil. We created the world’s first viral project that inspired an entire community through bright energy ideas and sport. As the children ran on tiles placed under the artificial pich, their energy was stored in batteries to power the pitch floodlights after sunset, creating a safe environment for them to play in. The project received media coverage in over 20 countries and was supported by Brazilian football legend, Pelé.

My second example was the first deployment of our SXSW award-winning V3 technology, at a new park in Washington DC’s DuPont Circle. Positioned in the heart of the USA’s capital, 10,000 people are passing over the installation every day and powering the lights in a new park by simply walking down the road. This installation is also sending live energy data to our client, the Washington District State Transport Authority website. The launch was covered by the world’s press.

Thirdly, in 2018 the Abu Dhabi Airports Company (ADAC) commissioned Pavegen and sustainable infrastructure leaders Masdar City to construct a 16-square metre energy harvesting walkway. The path connects two terminals in the high-tech airport, which handles around 2 million passengers a month. This is the first application of its kind in a commercial airport in the Middle East and builds on a successful pilot using Pavegen technology at Heathrow Airport. The installation featured prominently in local and trade media titles.

In 2015 you turned to the crowd to raise an initial target of £750,000 through equity crowdfunding. Why crowdfunding, and what was the outcome?

We like crowdfunding because, like our technology, it’s all about people – lots of them! The amount we wanted to raise wasn’t enough to really interest VCs, and anyway, we’d never have been heard of by anything like as many people if we hadn’t gone to the crowd for funding. When we launched our first raise, we were blown away by the response. In fact, we more than doubled our target, raising £2.1 million, which at the time was the largest tech raise of the year on the platform.

I guess you’re continually refining the product and how it works. What have been some of the landmarks?

Following that initial Crowdcube raise, the funds enabled us to hire a great team and then go on to develop and launch our latest model, the V3, which won a Smart Cities Award at SXSW and is now being deployed all around the world. A tessellated grid of equilateral tiles forms the top surface. This patented arrangement ensures that the V3 technology maximises both energy output and real-time data from each footstep and prevents any trip hazard.

The V3 has been deployed successfully at extremes of temperatures, including surviving two years of harsh winter and summer temperatures in Washington DC.

generates high-value customer analytics for clients in a software as a service model (SaaS). Created with Pavegen lead investor and Board member, Jeff Martin, ex Head of New Media Markets at Apple and leader of the iTunes project, the flexible ecosystem enables users to track their steps and convert these into rewards to be saved, redeemed for personal benefits or donated to global and local causes. At The Mercury shopping mall in east London, UK, Pavegen’s interactivity with an app has increased engagement with their shopper loyalty scheme by 15%.

Our next version will be simpler to deploy and its design will make it even more resilient and efficient.

Right now you’re crowdfunding again and have reached almost £1.6m. What are you going to use the money for?

Post-raise, the team will refine the rewards and customer analytics SaaS model for our target sectors of  Smart Cities, Smart Destinations and Retail.

The next iteration of the tech will also significantly reduce manufacturing costs, with simpler deployment, powerful new step detection and cloud-service integration.

The product will also integrate with photovoltaic (solar) generation to increase the power and range of applications. We will also be able to generate more complex data sets to enable more accurate movement tracking.

And the Hinduja Group [run by four brothers with a combined net worth exceeding £22bn] has backed you, what is their prime reason for involvement?

The engineering conglomerate, whose Co-Chairmen topped a UK 2019 Rich List, will be working closely with Pavegen’s team to reduce the cost of manufacturing and provide access to fast-growing markets in India and South East Asia.

Finally, Laurence, what are your next steps, and your vision for Pavegen in the next five to ten years?

We want to take our technology to every community around the world. We want to be the ingredient product in smart cities, providing a versatile technology that enables people to improve their environments through the simple power of their footsteps.

Crowd-related breakthroughs and the market disruption they can cause will be the subject of sector-leading speaker sessions and panel discussions at our next international conference, CSW Global 2019, running September 12-13 in San Francisco. Registration is open, you can reserve your place now.

Why The Crowd Is An Engine Of Growth: Haydn Shaughnessy On Understanding Disruption [#CrowdChat Recap] 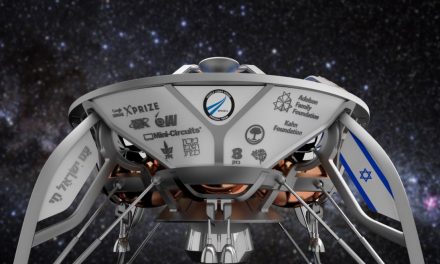