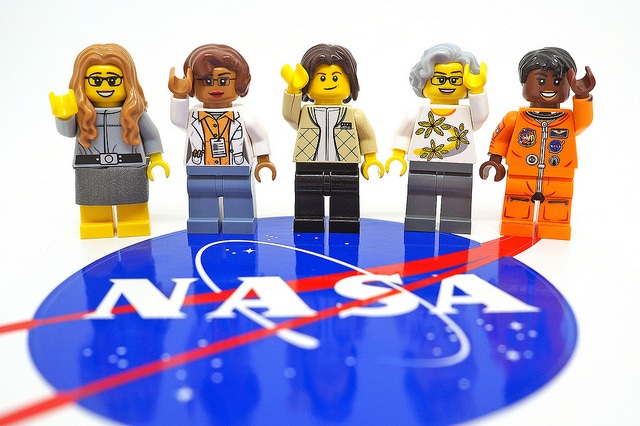 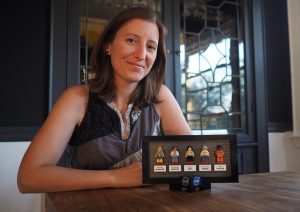 We spoke to Maia Weinstock, an American science writer and a LEGO enthusiast. After seven years of accepting Maia’s designs for generic scientist figures the company announced in February 2017 it would launch her “Women of NASA” set of figures featuring five prominent and inspiring women who have worked for the space agency. Here is the story:

Q: Please introduce yourself and your background

I’m a science editor and writer who has also spent a fair amount of time creating custom LEGO minifigures of scientists and engineers. My background is in science journalism, and I’m currently the deputy editor of MIT News.

Q: How did you get involved about LEGO Ideas?

I had been making custom minifigures of scientists and engineers since early 2010. Around that time, I saw one that someone created of computing pioneer Ada Lovelace and was inspired to design some for living scientists, since so few people can name any living scientists. I started with a friend of mine, Carolyn Porco, who is a planetary scientist working on the Cassini mission to Saturn. After that, I made a bunch more, and have steadily been adding to my collection over the years. When I heard about LEGO Ideas (formerly called Cuusoo), I thought it was a fantastic way to bring ideas from the public into Lego’s official offerings. And so I decided to participate.

Q: Why Women of NASA?

I wanted to combine several of my passions: space exploration, the history of women in science and engineering, and of course, LEGO. This seemed like a great way to pay tribute to five individuals who made key contributions to NASA history — and, by extension, to give kudos to all of the women who’ve helped make the U.S. space agency what it is today.

Q: Walk us through LEGO Ideas process such as prototyping, uploading and getting 10,000 reviews [10,000 supporters is a minimum level of endorsement required for LEGO to review a product idea). How long did it take you to get that many, was it difficult?

I started thinking about the concept quite a while ago, but I started to put it together and really solidify the design in the fall of 2015 and beginning of 2016. The project launched on LEGO Ideas in mid-July of 2016: I timed it so that the initial push for votes would coincide with the anniversary of the first Apollo moon landing on July 20, 1969. Being able to use this anniversary, and all of the associated social media content and hashtags, helped get the project seen. And that planning seems to have worked: most LEGO Ideas projects that achieve 10,000 supporters take months, if not years, to reach that milestone; my Women of NASA set got there in 15 days.

Q: LEGO Ideas is one great crowdsourced platform that accelerates innovation for LEGO. Have you participated in any other projects inside the platform, and would you recommend it to others?

I’ve now submitted three sets to LEGO Ideas — the previous two didn’t reach the required 10,000-supporter milestone, so they’re now archived. I would definitely suggest it as a way to put forth an idea: LEGO is one of very few companies that directly crowdsources product ideas, and I give the company a lot of credit for being open to that concept.

Q: Women of NASA set will be available in late 2017 or early 2018 in stores worldwide. What’s in it for you beside your name attached to these sets?

My goal for all of the sets I’ve submitted to LEGO Ideas has been to help inspire children and to add more female role models to the toy aisle. So with the Women of NASA set being approved for production, I’m proud to say that I’ve achieved that goal. Just hearing from fans, from teachers, from others who are completely excited to get a copy of the set or to add one to their classroom, has been reward enough! Winning LEGO Ideas designers do also receive a small percentage of the sales of their product.

Q: You brought these five courageous astronaut woman back: Katherine Johnson, Margaret Hamilton, Sally Ride, Nancy Grace Roman and Mae Jemison set to inspire a generation of kids. All of these woman are still alive except Sally. Have you met them, and if not are you planning to meet them?

I would love to eventually meet them all. Nancy Grace Roman was a friend of mine from before I submitted the set, so we’ve hung out several times. I met up with Margaret Hamilton last summer — we live in the same area, and Margaret used to work for MIT, which is where I work currently. I actually also worked for a brief time with Sally Ride, when we were both at SPACE.com — she was president of the company and I was a staff reporter. I was crushed when she passed away in 2012, but I’m honored to have connected with her when she was still with us. Someday I would also love to meet her longtime partner Tam O’Shaughnessy. I haven’t yet had a chance to meet either Katherine Johnson or Mae Jemison, but I very much hope that I can do so sometime soon?

Join us at CSW Summit D.C. on June 15th to hear an international lineup of speakers and panelists sharing their insights on trends and developments in the world of innovation through crowdsourcing.