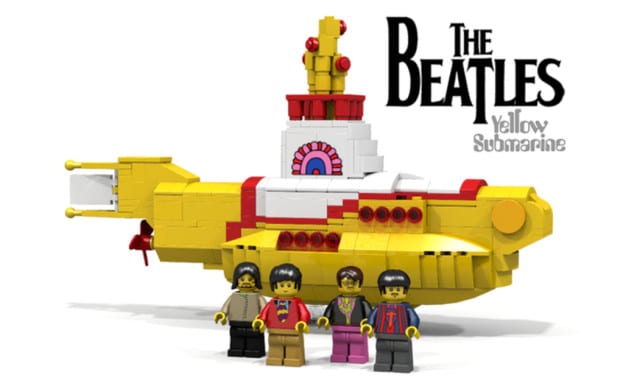 Check out our curated Weekly RoundUP of the breaking and must-read news – The latest project to come out of Lego’s crowdsourcing platform; overcoming Europe’s biggest disconnect; crowdsourcing leading to better smartphone designs, and more …

The latest project to come out of Lego’s crowdsourcing platform

Guess what’s the latest development to come out of the Lego Ideas crowdsourcing platform? It’s the “Yellow Submarine”

“In the town where I was born”… and many other communities around the world, enough people love the Beatles’ “Yellow Submarine” that they inspired Lego to memorialize the beloved song with a special yellow submarine Lego set. Included with the underwater sub are pieces to build John, Paul, George, and Ringo, too. The project is the latest development to come out of the Lego Ideas crowdsourcing platform. Full speed ahead!

“This is an ambitious, revolutionary project that marks a fundamental shift in the way we view human rights research – and gives anyone with internet access the chance to help expose some of the world’s gravest injustices,” said Milena Marin, Amnesty International’s Senior Innovations Campaigner. “There is a huge mass of terrain in Darfur where we have information suggesting grave human rights violations have taken place, but analysing this data is a long and laborious task. That’s why we are harnessing the power of our huge network of supporters to help.”Credible, verified information about the impact of the violence on the civilian population inside Jebel Marra is extremely difficult to find. Restrictions on access imposed by the government means no journalist, human rights investigator or humanitarian actor has been permitted to conduct any assessment of the last few years. Despite these barriers, an Amnesty International investigative report released last week uncovered harrowing evidence of the repeated use of suspected chemical weapons against civilians, including very young children, by Sudanese government forces in the Jebel Marra area of Darfur over the past eight months.

How to overcome Europe’s big disconnect: Lessons from a crowdsourcing exercise

How could Europe be revitalized and its growth restored after eight debilitating years? Get your answers from Pascal Lamy and Eric Labaye

How could Europe be revitalised and its growth restored after eight debilitating years? Seeking to answer that question through a crowdsourcing exercise, the McKinsey Global Institute (MGI) earlier this year launched a prize essay contest. The EU “is not short on ideas to implement or on good ideas being implemented. The disconnect appears to be one concerning inspiration,” one author writes. “Undermining Europe’s growth drivers is a dangerous counter-narrative which is gaining momentum, one that portrays the EU as an inefficient sovereignty thief, hell-bent on generating wealth for a rich ‘elite’ at the expense of the people of (insert any member state here), and the problems and tensions associated with increasing globalisation are blamed on the EU,” writes another. The good news is that our authors have some concrete proposals to resolve this disconnect. There are three main types.

Instead of waiting for the big brands to design their next products, gifted individuals can show their own vision for the future of smartphones. They can come with groundbreaking, forward-looking and refreshingly creative product ideas that have the potential to bring revolutionary changes in our lives, just like the first smartphone did. TheeYeka 2020 smartphone contest initiative is one of such crowdsourcing platforms for future smartphone concepts design. Those who design the best smartphone concepts and have their suggestion integrated into a ZTE project design can win a chance to the next CES trade show and cash prizes up to $1500. The setup of the Project CSX smartphone design crowdsourcing is very similar to LEGO’s Ideas program. An early access feature allows community members to purchase the final product. The initial submission round was followed in September by voting and concept presentation. Two more rounds of voting came to pass before a grand prize will be awarded now, in October. According to ZTE official Project CSX website, on Wednesday, Oct. 12, has been launched the final contest where users can vote on the device they want to see next.

“The app gives the user a visual experience. It is easy to transfer data collected from it on to a map, and it can be shared around. It is user-friendly too. It will be far more useful if state government agencies took it up,” said Jayaram Venkatesan, convenor of Arappor Iyakkam. With the help of Teach for India, an NGO, Civic Fulcrum took 30 students of Chennai High School in Kotturpuram for area mapping in Mylapore.”We were able to gain 180 data entry points. We hope to convince the corporation to allow us to take the app to nearly 50 schools,” he said. Senior corporation officials welcomed the premise of the app but insisted the 1913 setup remained effective. “Grievances are intimated immediately but the redressal part on the field is where we are weak.Whether it is 1913 or an app, when it comes to addressing an issue, it is invariably diverted to the local junior engineer or assistant engineer, who is overburdened with responsibilities,” an official said.