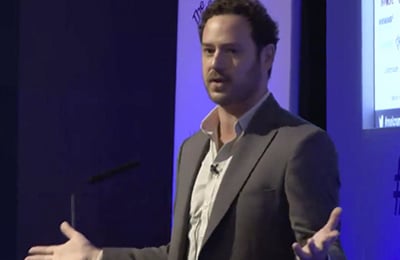 Head over to the Crowdsourcing Week Global 2016 hub for more insights, expertise and passion of the thought leaders and innovators speaking at this year’s conference. Join us 11-15 April in London for a week of fresh ideas and insights on the global Crowd Economy. Register here for exclusive pricing, available only for limited time.

As Managing Director of Silverman Research, Michael Silverman specialises in the development, implementation and analysis of systems that give rise to Social Collective Intelligence of employees, customers and consumers. Working with some of the world’s largest organisations, in the past two years, his agency has been using its expertise on organisational studies and knowledge about new research methodologies to develop a new type of Collective Intelligence tool—namely Crowdoscope—which combines survey research methods with discussion forums.

Speaking of the foundations of his research methodologies, Michael explains, “The development of Crowdoscope came about through the growing difficulties in traditional employee survey research, even though it is still the most commonly used method to generate employee voice and opinion. On the most basic level, many are tedious to complete. It’s meant to be engaging but everyone hates staff surveys and they tend to be boring. There are too many questions and not enough focus on comments. When employees do bother making comments, they tend to disappear into a corporate black hole.

“We have found in our research that people tend to make more of an effort with their comments if they know they are being read and rated by their peers. We are really excited about the launch of Crowdoscope, which uses technology to produce new ways of asking traditional research questions, in more interactive and engaging ways.”

“We have found that with crowd-based initiatives used in organisational research, employees have become more engaged as participants.”

Michael agrees that conducting Collective Intelligence can be categorised as disruptive of what he describes as dated methods. He says, “Traditional surveys and polling are outdated, and the impact of social media has meant that unstructured feedback is growing in prevalence, with discussion forums unequipped to present comments from large communities. Crowdoscope takes advantage of the increasing capabilities of new media technologies, producing interactive data visualisations so that participants in research are provided with a more engaging and transparent experience.

The majority of research tools simply ask users to answer a number of questions, but Crowdoscope is designed to enable participants to provide their views and gain awareness of different perspectives. In this way, Crowdoscope helps to encourage openness and discussion among participants.

“By offering a tool that is simple to set up and manage for small or large groups of participants, generating automated outputs, we can provide organisations of difference sizes and budgets the ability to conduct sophisticated bespoke Collective Intelligence projects with no need for a dedicated data scientist, or hiring an expensive research agency.”

It’s no surprise Silverman Research advocates the massive opportunities crowdsourcing creates as an intrinsic method of conducting research. “We have found that with crowd-based initiatives used in organisational research, employees have become more engaged as participants,” explains Michael. “Employees care about the organisations they work for, and are very much the experts on the ground. Given the chance, employees embrace the opportunity to contribute in a more open dialogue.

“Traditional surveys and polling are outdated, and the impact of social media has meant that unstructured feedback is growing in prevalence, with discussion forums unequipped to present comments from large communities.”

Organisations that have used Crowdoscope have been provided with much richer detail in comments submitted. Collective Intelligence tools are being applied for a range of uses within networks of employees, customers and other external parties. Increasing connectivity means that groups are able to cooperate and achieve what once was the exclusive domain of large centralised organisations. One of the areas in which Collective Intelligence methods have been most commonly used is for generating ideas and solutions within the area of ideation and innovation.”

Looking ahead, Michael is transparent about the important steps Silverman Research and its wider industry can take in embracing new technologies and the crowd economy. He says, “Thinking about the future of Collective Intelligence as a research methodology, it is clear that developments in human-computer interaction are likely to play a big role enhancing human-human and human-machine interaction.

“However, for many scientists and entrepreneurs, the ultimate aim is to develop hybrid systems that employ both human intelligence and advanced machine intelligence. The progress being made within the fields of artificial intelligence and machine learning is also likely to be at the forefront of Collective Intelligence as it evolves in the coming decades.”

Join Michael at Crowdsourcing Week Global on Thursday, April 14, 2016 in London when he will speak about Collective Intelligence in Organisations.