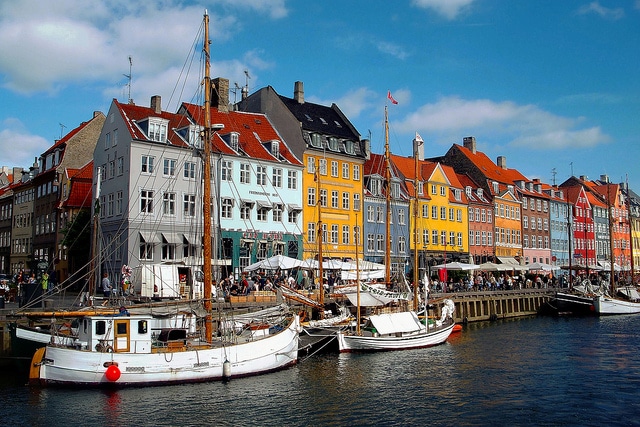 The city of Copenhagen is making a public call to citizens, companies and government to make the transition to the new, connected and inclusive economy. With many great cities in the running, it is no mean feat that Copenhagen nabbed the top spot, for two years in a row, as Fast Company’s most innovative city in Europe. According to The Global Innovation Index 2014, Denmark remains one of the world’s top 10 most innovative countries. There is a deliberate attempt all around to model behavior, mindsets and infrastructure for a more efficient, resource -sharing, low impact lifestyle while maintaining a high standard of living which brings me to the question — are efficient cities more crowd dependent or cooperative? Or are crowd supportive cities smarter and more innovative? This isn’t a chicken-egg question but the result of a positive feedback loop underscoring the notion that collaboration breeds inventiveness.

Nearly 40% of Copenhagen’s Commutes Are On Bikes.

Copenhagen is pedestrian friendly and #2 on the most bike friendly cities in the world. In addition it has a well developed public transportation system which means there is more opportunity for interaction between people and city infrastructure. Community feeling and belonging is key to effective collaboration and the city’s bicycle and pedestrian friendly development is fueling a social connection among citizens. The City takes bicycling seriously and even has a ‘Bicycle Strategy 2025’.  The obsession with bikes has turned inventive to connect bikes to the public transpiration system so commuters can avail of an integrated transport solution. GoBike offers the first real alternative to car transport in the cities by offering bikes, fitted with a PC Tablet that helps commuters connect bikes, trains and buses seamlessly on their commute.

Collaboration and unity are not just talked about in social and cultural settings in Denmark. According to CRCResearch, “in Copenhagen, significant efforts were made to collaborate across party lines and between government departments, thereby gaining approval from both the city council and the public.” The Danish government is based on consensus politics, consisting of multiple party representation in Parliament at any one time. One of the least corrupt societies, Copenhagen has been hailed as one of the best cities to do business in Europe. The Danish are also proud egalitarians, an important tenet to boost the crowd economy.

As part of a new initiative in 2013, the City of Copenhagen has launched a data portal where entrepreneurs and established businesses can download several sets of data from various city departments for free. The aim is to give interested companies the opportunity to use data sets on traffic, parking, road works and much more to create new business opportunities and re-think resource consumption and distribution on a city level. The data portal also partners with Copenhagen Cleantech Cluster Innovation Platform for Smart City Digital Infrastructure and aims to pool public and private data sets to help entrepreneurs find exciting digital solutions. The project is designated as a ‘lighthouse project’ and is a central piece in the overall Smart City agenda in Copenhagen.

2014 is especially active for Copenhagen as it is showcasing all of its efforts towards being a smart city to the world, inviting anyone interested to learn and adopt its policies. #SharingCPH will share solutions and experiences through events for Copenhageners, conferences, masterclasses and guided tours. The goal in 2014 to turn Copenhagen into a living laboratory for green solutions is not one that involves only city authorities.

“With some 100 partners across the city – from grass root organisations, housing and estate groups to businesses, architects and planners, Sharing Copenhagen promises to be an Eldorado for other European cities seeking to meet the challenges of modern city living and sustainability. Our invitation is – come and see, and come and share with us,” says Casper Harboe, Programme Manager of Sharing Copenhagen – European Green Capital 2014.”

Living sustainably is embedded into the Danish lifestyle. Yet the city is not stopping there. Its reputation for being the greenest city in the world is not without reason. Copenhagen has the lowest carbon footprint per capita in the world but that is just not enough. The city aims to be carbon neutral by 2025 and the government is not doing this alone. The Danish are seeking a bottom-top approach to their goal instead of just formulating regulations at the policy level. There is a call to “co-create, co-develop, co-inspire to cope with the present and future environmental and climate related challenges.” Voresomstilling.dk, “Our Transition”, is a crowdsourced platform to encourage citizens, companies and the public sector to share their transition projects and ideas within areas such as water, energy, transportation, food, etc.  The campaign currently holds a database with more than 400 projects, from which 9 winners were chosen by a jury including Connie Hedegaard, European Commissioner for Climate Action.

A unique public-private partnership called the State of Green is the official green brand for Denmark,  that gathers all leading players in the fields of energy, climate, water and environment and fosters relations with international stakeholders interested in learning from the Danish experience.

Copenhagen has been selected as the European Green Capital for 2014.  The city also has the most ambitious carbon reduction goal to eliminate the use of fossil fuels by 2050, all requiring large scale adoption of innovative programs, collaborative consumption and smart businesses. Already a leader in wind turbine technology, Denmark and Copenhagen is also seeing a crop of startups looking to reduce consumption and impact at the consumer level. Notable sharing economy businesses cropping up in Copenhagen include Resecond, an online shop that allows women to swap nice dresses for a monthly fee; Jepti, an online portal that allows citizens to rent, lease and borrow anything from household items, tools to cars; Minbildinbil, an online peer-to-peer car sharing networks. This trend is only set to grow.

Although Copenhagen is a thriving ground for the crowd economy, roadblocks exist that need to be overcome. A smart city value proposition needs a strong growth component that combines innovation, investments & employment. As the city prepares to overcome challenges and meet its ambitious goals, some focus areas like alternate funding sources for startup entrepreneurs needs attention. Copenhagen is still not a financial haven for entrepreneurs with many having to seek financing abroad from Sweden and England, though proposals, currently in Parliament could legalize equity crowdfunding opening up avenues for startups.

Michael Eis, founder of booomerang.dk and equity crowdfunding platform CrowdInvest.dk, along with Frederik Ploug Søgaard, founder of FinanceLab and MarketingLab, have created the Danish Crowdfunding Association to “actively engage entrepreneurs and investors who see crowdfunding as the evolution for capital formation for small companies.”

Copenhagen represents a tremendous potential to be a model city for the crowd economy in Europe and Crowdsourcing Week is very excited to come to Copenhagen to help take this conversation to the next level. Join us Oct 14-16.

This post by Priti Ambani appeared first on the Collaborative Consumption Blog.