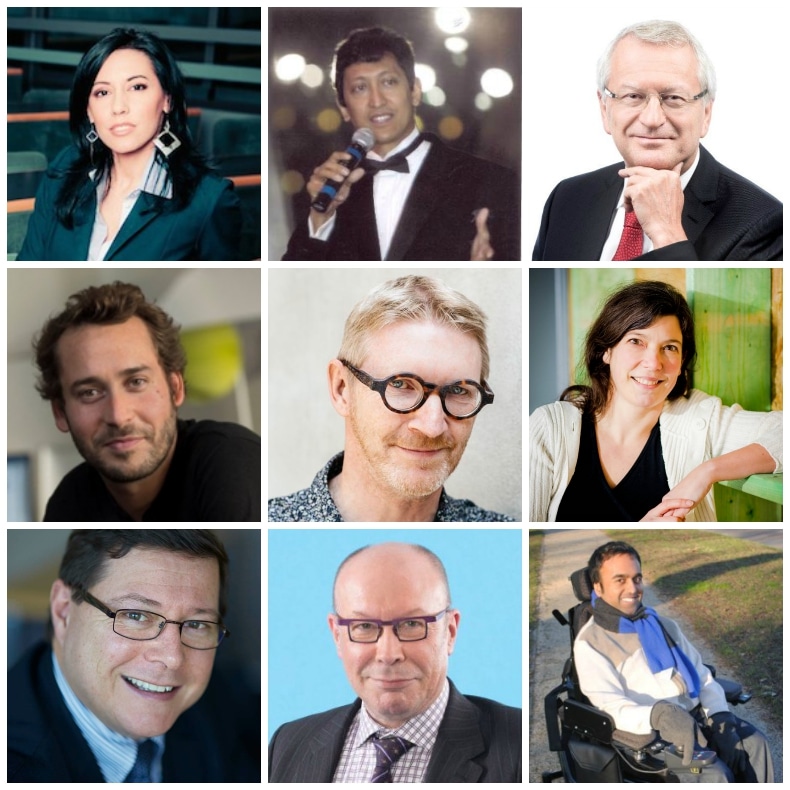 Crowdsourcing Week Europe 2015 takes the 5-day signature conference to the next level as we beef up the content and program for October (#CSWEurope2015). We are pleased to present to you the newest speakers who will share insights and feats in their respective industries and stimulate discussions on collaborative and crowd-powered paradigms across Europe and beyond.

In addition to the 9 new speakers we introduce you to below, we’re thrilled to announce Vice President Jyrki Katainen will Deliver Keynote at our European Forum for Entrepreneurial Finance plus the Top Level Government Participation of Belgian Ministers at CSW Europe 2015.

Once again, the million dollar question is: have you booked your ticket yet? Because you cannot afford to miss the discussions taking place at this event. This is your chance to meet, network, and hear from some of the most disruptive and visionary minds in Europe.

Dan is a performing stand-up comedy who has performed for Hillary Clinton, Howard Dean, Mrs. Tony Blair, Sanjay Gupta, Andy Grove and many other luminaries.

Born in 1954 in Sint-Niklaas, Belgium. He holds a Master in Law degree from the University of Leuven and a Master in Finance and Accountancy degree from the Institute of Economics EHSAL in Brussels. Yvan De Cock started his professional career in 1978 as a lawyer in the law offices Winderickx (Brussels) and was appointed legal counsel at the Belgian Export Credit Agency Delcredere in 1982.

He joined Generale Bank, Brussels in 1984 where he assumed various positions in Export & Project Finance, Commodities Finance and Corporate & Investment Banking. After the acquisition of Generale Bank by Fortis in 1998, he was appointed Global Co-Head Corporate Banking. In 2002 he became CEO of Fortis Bank UK. Between 2006 and 2011 he served as CEO of Fortis Bank Turkey. In March 2011 Yvan De Cock was appointed Member of the Executive Committee and Head of Corporate and Public Bank Belgium of BNP Paribas Fortis. He is also Chairman of the Board of BNP Paribas Fortis Factor, Member of the Board of Fortis Private Equity Belgium, Member of the Board and Audit Committee of TEB A.S. He is fluent in Dutch, French and English and has a good command of German.

Arnaud Burgot is CEO of Ulule.com since January 2014. He joined Ulule at the end of 2011, to participate in the launching and development of what is now the biggest reward based crowdfunding website in Europe. After a business school master, Arnaud began his career at Pricewaterhouse Coopers, in the technology and entertainment sectors, where he gained a deep knowledge of corporate finance and financing mechanism. His love for entrepreneurship and his will to take part of something really innovative lead him to meet Ulule’s founders in 2010 and to join Ulule’s team the next year. Arnaud is also Vice President of the French Crowdfunding Association.

Herman Konings, built in 1964, is a Master in theoretical psychology (Catholic University of Leuven) and managing director of the Antwerp agency for trend analysis and future research Pocket Marketing/nXt. As a trend analyst and consumer psychologist, Herman regularly offers advice, holds workshops and gives lectures for companies, societies, governments and higher education about changes in trends and expectations for the future. Between 2005 and 2015 Herman gave about 2000 lectures and work meetings, about 700 in the Netherlands and over 150 outside of the Benelux. Herman is a genuine storyteller who inspires the spectator on an engaging course about the amazing world of passions and interests, trends and future expectations, and about what is and what will be.

Karen is co-founder and Managing Director of Startups.be, the Belgian NGO that unites the entire startup ecosystem – ranging from entrepreneurs to incubators, accelerators, investors, public agencies and corporate innovators. Mapping out all the actors in the startup scene, Startups.be soon became the ‘voice’ of the startups – representing their interests in numerous task forces and think tanks at all levels of policy making. The Belgian Startup Manifesto, a crowd sourced set of proposals on how to improve the entrepreneurial climate in Belgium set in motion a powerful movement that led to the implementation of a tax shelter for angel investments, adapted legislation on crowdfunding and e-commerce and certain tax exemptions within months. As the “one-stop-shop” for and on Belgian tech entrepreneurship, Startups.be develops a soft-landing Go Global program to enable speedy international market-entry for Belgian tech talent and foreign startups looking to enter the Belgian and European market(s). Karen’s drive for matching people, growing cross-industry and multidisciplinary communities and high-impact programs allowed her to build and grow the Marketing strategy at iMinds, the Felmish software innovation center that put an entirely new applied research model on the map – actively supporting the go-to-market of these inventions.

“A Collaborative and Open Approach to Exploit the Full Potential of the Technological Innovations” – Stéphane Beauduin, Chief B2B Officer, Mobistar

Stéphane Beauduin is Chief Enterprise & Wholesale Officer at Mobistar, a Belgian Telecom Operator part of the Orange group. He started his career working for Procter & Gamble in marketing and sales management functions across different countries, Benelux, US and UK. He then ran a pan European business unit start-up for online travel within the Expedia.com group, the world’s largest online travel company. (Initially part of Microsoft group). He joined Mobistar in 2004 as marketing director for the Business to Business Market. In April 2009 he became the newly appointed Chief Marketing Officer to become the Chief Enterprise & Wholesale Officer in April 2012.

Roger Kesteloot is the Director General of Antwerp-based company De Lijn, a company run by the Flemish government in Belgium that provides public transportation. Kesteloot will participate in the panel discussion together with Srin Madipalli, Shana Smeets of BlaBlaCar, Alex Gashcard of CarAmigo and among others.

Srin is the CEO and co-founder of Accomable, an online markeplace for accessible travel to help people with disabilities or those who are elderly. He is formerly a corporate lawyer who has degrees from Kings College and London and Oxford University. Srin is a self-taught coder who also serves as Accomable’s lead developer.

Get more information on CSW Europe 2015 tracks and the full list of speakers on the conference website. Follow the action in the lead up to the conference on social with the hashtag #CSWEurope15. Register now.