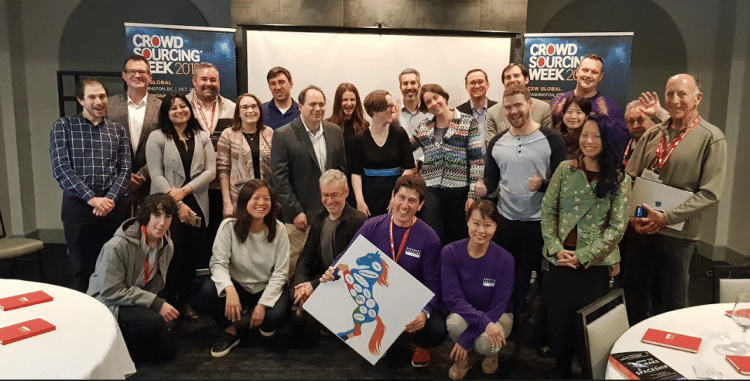 The Weekend Expeditions started at the National Air & Space Museum where Bud Holloway gave the group more than a 2 hour tour around space.

Friday’s conference had ended with a panel discussion on how using open innovation input is an integral part of commercial enterprises completing their preparations to challenge the space frontier. The visit next morning to the National Air & Space Museum was a timely reminder of the path they are following. 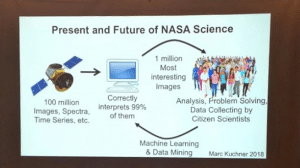 In the afternoon session at D’Arcy Hotel,  Marc Kuchner of NASA opened the presentations with his talk about citizen scientists and NASA’s involvement in crowdsourcing. Much of it involves enlisting the help of volunteers to examine 1% of images of space that have been shortlisted by technology to look for the unexpected.

There are a number of citizen scientist communities. NASA has its own GLOBE network of 640,000 students, while the largest is Zooniverse which numbers 1.7m people. 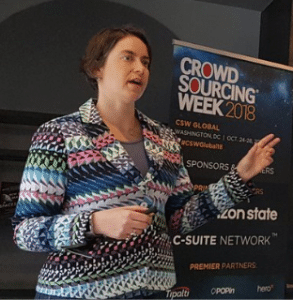 The next speaker Dr. Liz MacDonald first witnessed the aurora as part of her doctorate research conducted in Alaska, building instruments that fly onboard research rockets to measure the particle precipitation causing the lights. She established the Aurorasaurus platform and now uses crowdsourcing to engage citizen scientists in reporting aurora sightings – a process of “aurorasourcing.” 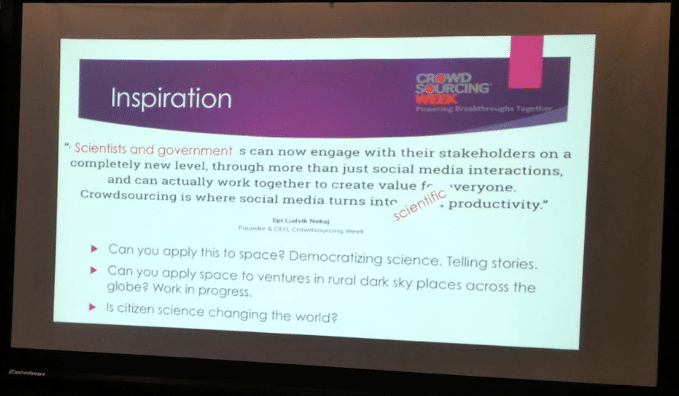 Third speaker of the afternoon, NASA Research Astrophysicist Dr. Joshua Schlieder, talked about using citizen scientists in the search for planets outside our solar system, called exoplanets. The Exoplanet Explorers community within Zooniverse numbers over 20,000 people who study new data from NASA’s kepler space telescope to find new exoplanets, as well as further numbers of citizen scientists who use the Space Hunters portal to perform similar tasks. He also talked about TESS – the Transiting Exoplanet Survey Satellite that observers 16 times more than Keppler. 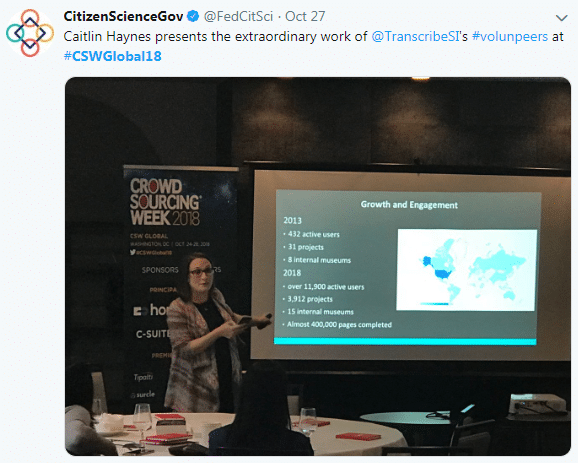 Leaving the space frontier, Caitlin Haynes told us about the Smithsonian’s crowdsourcing project – The Transcription Center – and how they’ve continued to evolve the project over time. They have created a digital volunpeer community with a target to reach 2 million people by 2020. The project’s goal is to digitally transcribe the entire content of the Smithsonian Institute – and that needs a lot of help!

At the outset the Smithsonian was fearful of inaccuracy and created a three step verification process – Transcribe, Review and Approve. Though they never had to use the Approve stage because their volunpeers were so accurate, and so ahead of timetable that they were unable to cope with the volume of it anyway.

To close the afternoon, Dr. Carrie Seltzer spoke on “Saving Species with Crowdsourcing and AI.” iNaturalist is a social network for naturalists and citizen science platform for biodiversity. They encourage bioblitzes as communal citizen-science efforts to record as many species within a designated location and time period as possible, and are great ways to engage the public to connect to their environment while generating useful data for science and conservation. It is also incredibly valuable as a means to monitor how biodiversity is changing.

The second Weekend Expedition on Day 5 of the conference started at the National Gallery of Art where Naan Morrison gave the group a one and a half hour tour. 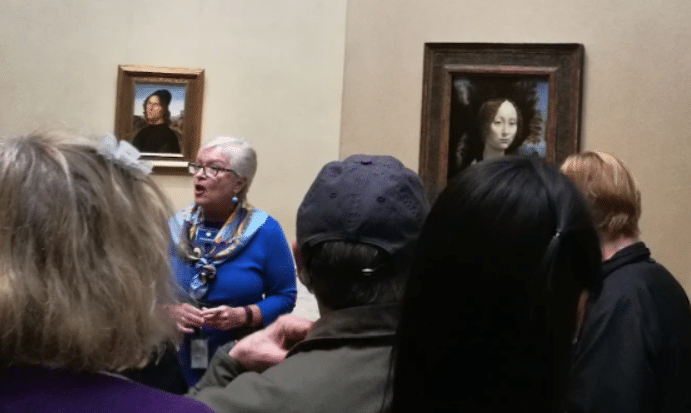 It was a chronological tour that started with art from the Renaissance including Leonardo da Vinci’s paintings, and then and moved through the centuries to record Rembrandt, Monet and other Impressionists, and finally modern art.

The Italian Renaissance was a period of European history from the 14th century to the 17th century, marking the transition from the Medieval period to Modernity. It struck us that the development of art, and the changing structures of societies it reflected, is a visible metaphor for the changes we are witnessing in technology and its uses to transform methods of business and even government.

We are now living through a new renaissance in business with an entirely new level of transparency and decentralization due to the irrefutability of blockchain and the power of mass, individual communication. Their uses aren’t leading to step-by-step improvements in established methods or practices, they are powering transformative breakthroughs with new ideas and new ways to make them a reality.

It felt a very appropriate way to close CSW Global 2018, our assembly of top class delegates and over 60 speakers drawn from the world’s top thought-leaders and practitioners in the crowdsourcing and open innovation sectors.